In my first blog post about the 2017 Election leaflets I only looked at material from the Pirate Party, Plaid Cymru and Labour, because they were the only ones I had received. After I tweeted the link the Plaid Cymru candidate, Ian Titherington, replied to me confirming that he always squints in photos. (I'd made that comment about his picture on the leaflet.) We had a bit of a chat and he said he had received leaflets from the Green Party and the Tories. Ian doesn't live that far away from me so I'm not sure if that's just people not willing to leaflet our street or what.

Anyway, in fairness to Ian, and because he got back to me, here is another scan of one of his leaflets. Of note is his bio, confirming that he lives in Grangetown. (Again, click on it it read it bigly.) 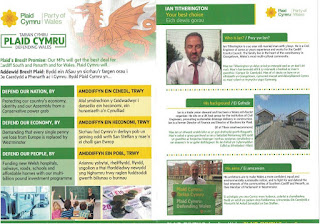 My only criticism of this is that as he lives local, the team could have swapped out some of the stock photos and used, say, a picture of a local school, or local businesses. The empty shot of Penarth Pier is arty, but it would have been better if Ian had been in it.

You can also see the "Defending Wales" message quite clearly on that leaflet - defend the nation, defend the economy and defend the people. And the Brexit promise of the best deal for Wales, that everyone is promising and realistically no one can deliver. The UK is going to get screwed on that.

Anyway, almost as if they were alerted to the fact they had been  missed out on the blog, the Tories got in on the act. Two leaflets arrived yesterday through the post, one addressed to me and one to Cathy.

In stark contrast to Ian's intro, Bill Rees the Tory candidate doesn't tell us where he lives. Perhaps because he lives in Oxfordshire. The Tories have done this for a few elections now as it seems they can't find a suitable local candidate.

Bill's leaflets are plastered with the "strong and stable" meme that has been a feature of Tory campaigning and both have an entry for perhaps the most obvious caption competition: "Bill Rees Standing With Theresa May" next to photos of him standing with Theresa May. 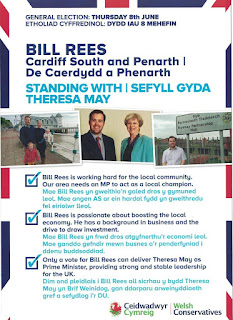 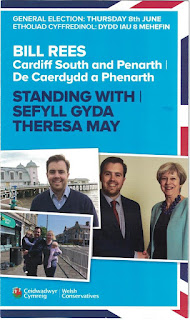 One thing - does no one go to these photo ops with nothing better than a phone camera? I mean, come on, invest in something with a flash for goodness sake.

Anyway, Bill has been touring the constituency. I think the family photo is on Splott Road. I bet his kids loved being taken there. I hope they got to go to the nice play park round the corner. Bill makes sure he is in his Penarth Pier shot as well, both with the family and on his own. Also, standing next to the Rumney Partnership Hub sign, which I am sure he was fully cognizant of before being parachuted in as a candidate. Fair play, that's a clever idea. The association is that he is involved in community action but he doesn't make any claims about it.

Inside one of the leaflets, there is another dimly lit photo of Bill with Theresa May. They both seem very happy to see each other. He's also might be supporting local businesses as he could be buying an ice cream on Penarth Pier. It's hard to tell. 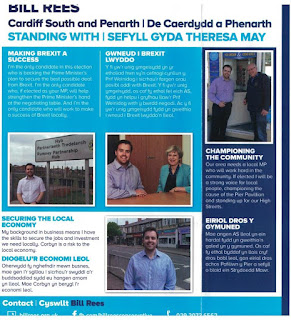 Also on that leaflet is something that I think might be a misstep, really. It's a contrast between Theresa May and a "Coalition of Chaos". (Theresa should know all about chaotic coalitions, having been Home Secretary for five years in a coalition, although this isn't mentioned.)

Then it says: "Think Jeremy Corbyn as Prime Minister is never going to happen? DON'T BE SO SURE" followed by headlines of unexpected wins for Trump and Vote Leave. 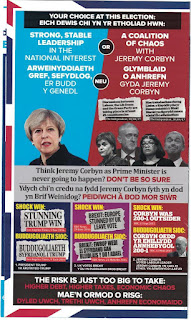 I read that and thought, 'What? The Tories think Jez might actually win? They think it's a possibility?' If so, I think they could well be far more optimistic about Labour's chances than Labour are, even. Putting those headlines in seems to imply it's a much closer race than anyone seriously thinks.

It seems to me to be a really dangerous strategy. You're basically saying the guy you're up against is a real challenger. It makes you look scared. Less strong. Less stable.

I doubt the headlines on Friday will be as unexpected as some of the headlines we saw in 2016, but the Tories are the only ones who seem to think it's possible.