This is the last game I will see in the 2016-17 season (my usual end of season post will be along soon). And what a way to cap it, a European final in the city where I live, and the first live women's game I have ever been to. I joked to my friend Steve as we walked towards the ground that it was a 'personal growth moment' for me.


22,000 other people also came to the game, meaning the Cardiff City Stadium was very full. The PSG 'ultras' down in one corner added to the atmosphere with non-stop chanting. Several people had travelled from France for the game. The couple behind us were a PSG fan and a Lyon fan so there was plenty of what I presume was banter between them.

The game itself was technically very good, but it lacked pace. I can't decide if that was because both teams were nervous, or whether it's because they were both continental teams, or whether it was because it was a women's game. There were a couple of occasions where a quick ball over the top for a runner would have opened up scoring opportunities. But the forward line seemed a bit slow to capitalise.


The game ended 0-0 but I still can't really work out how as I saw contenders for the two worst misses I have ever seen in one game. There was also a shockingly bad offside decision when a defender  sold her keeper short with a back-pass and the winger who ran past her was then flagged offside. The attacking player went nuts at the referee, and rightly so, because it was an "Injustice!" as the Paris fan behind us shouted.

Woman of the match for me was Wendie Renard, the Lyon defender and captain. She has got a pass on her, almost Gerrard-esque in how she hammered the ball across the pitch. She also has a real physical presence. At one point a Paris striker tried to play the ball and run past her and Wendie just 'edged' her a good six yards off the field, casual as you like.

Anyway, it went to extra time and no goals were forthcoming so we were up for a penalty shoot out. Many of the penalties were drilled home, but Eugenie Sommer, the Lyon striker fluffed her shot, which was Lyon's second. Fortunately Lyon keeper Sarah Bouhaddi saved one of the Paris penalties. Wendie went after Sommer, and just hammered the ball home. She walked back to the centre circle at the slowest pace, as cool as ice.

And it was Bouhaddi who had the decisive kick. It had gone to sudden death. Both teams had taken 7 and it was tied at 6-6. The Paris goalkeeper, Katarzyna Kiedrzynek, stepped up to take the 8th kick and missed. Then Bouhaddi placed the ball and drilled it home to win Lyon their fourth Champions League title. I filmed both kicks!

That's one of the things I love about going to football matches. You never know what quirk or oddity will come up that will make it a unique experience. I've never seen goalies take back to back penalty kicks in a shoot out before. I doubt I ever will again. But I captured the moment in all its grainy mobile phone footage glory.

We watched the trophy presentation. Wendie hoisted the cup as ribbons were exploded over the victors. Of course we had to watch this from the back, but it still looked impressive. 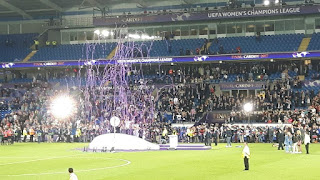