More litterpicking tales from the streets of Grangetown -

Sunday morning. The promise of rain. Half the city is still blockaded in the aftermath of the UEFA Champions League final security clampdown. And I was off to a Tidy Grangetown litter pick along the south-western river-edged border of G-town.

I've blogged before about how you learn a lot about an area by picking up its trash. This time I learned a lot about the people who drive through Grangetown as well, particularly the ones who drive along Ferry Road. They eat McDonald's and throw their Big Mac boxes, their Chicken Wrap wrappers, and their drinks cups out of the window, Seriously, they can't possibly take them home and put them in the rubbish like civilised people would.

The big news is that now litter pickers get the option of one of the new high-viz vests. I felt I had to wear one, really, and Sara, one of my lovely neighbours from my street obliged me by taking a photo. 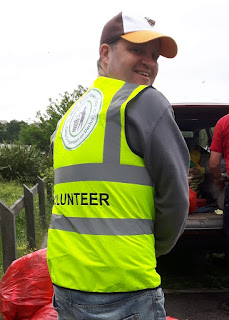 It's important to pick a yellow vest, explained Dave as he pulled out the big bag of vests, because the orange ones are for people doing community service.

There are always odd things to find while litter-picking. This time round I found a pair of gloves, a dashboard hands-free mounting device for a mobile phone, a coat-hanger, a Romanian coin, and a troll.

There was an awful lot of rubbish associated with smoking. Mainly cigarette butts and packets, but people just chuck away their e-cigarette liquid bottles as well. Alcohol-wise, there was a bottle that once contained very cheap cider and several cans, but most of the cans I picked up were soft drinks and those awful energy drinks that stink to high heaven. Even the bugs don't touch them. In terms of other drugs, this time I only found two nitrous capsules, but lots of suspicious little baggies. Sara used a sharps kit to sort out a syringe, which is a bit more serious.

I finally got to pick up one of those plastic multi-rings that hold together cans of lager. They are always the thing you see on environmentalist memes trapping fish and other marine life. Well, this one was safely bagged, so who knows, I might have saved a sea-turtle.

It's hard to tell how long some trash has been sitting there. From the depths of a hedge I pulled out a Cherry Coke can that was completely faded on one side. 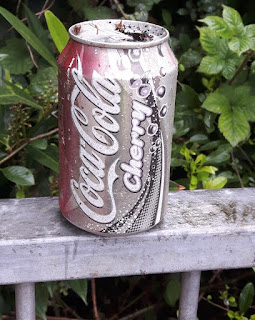 It was also home to a family of woodlice, but I shook them out safely before bagging the can. I don't know how long a can has to sit in undergrowth before it is bleached by nature, but I'd guess it had been there a couple of years. It was next to a Calippo Shots tub. I thought Calippo Shots had been discontinued a while back, but a quick Google shows they can still be bought, so that gives no clue as to how long the Cherry Coke can had sat there.

But regardless of how long it had been there, it's not there now. And that's all that really matters!