The most awesome blog post about birthdays ever (or: The Night I Met Face Man)

The good thing about having your birthday on Good Friday is a long weekend to recover. Plus, being holy, I also got to go to church on my birthday with the added bonus of it being shorter than the average service. (Not that I mind going to church normally, but it was my birthday.)
The party started on 1 April when I had a job interview with some folks I've done quite a bit of freelance writing for, and then got a phone call to ask if I wanted it. Of course, I did. The guy offering the job was really glad. "I got the man I wanted," was what he said.
Now I know I shouldn't take the fact that my entire team has been downsized and outsourced in any way personally. But it has felt a bit like all our hard work has been reduced to 'Yeah we can get a couple of people to do what you do for nothing.' I'd be lying if I said my confidence hadn't taken a hit. I'd also defy you to go through the same process and not feel any rejection. Do feel free to try.
But knowing that now I'm going someplace where I'm wanted has lifted me.
In the evening we went to see a boyhood idol of mine, Dirk Benedict, appear as Lieutenant Columbo at Cardiff's New Theatre. I was very excited, much to the amusement of my wife and our friends who came with us. Thing is Dirk Benedict was Face Man in that most awesome of TV shows The A Team. I liked him as Starbuck in Battlestar Galactica too, but for me he will always be Face.
We did something afterwards that I've never done before - queued at the stage door like excited groupies. We were first in line when he came out and I was tongue-tied. I wanted to tell him how huge a fan I was when I was a kid; how when we played A Team in the playground there were always arguments over who would be Face, and so on.
But I didn't. I laughed at his jokes, stammered a request for a photo, and got him to sign a flyer. Then walked away knowing that I had put my arm around Face Man and got it on film. 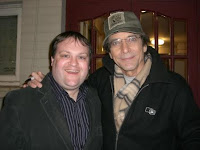 Truly a memorable 'birthday eve': new job, meeting Face Man... how could my actual birthday measure up. Surely all I was destined for was an anti-climax.
Well, no, actually. My birthday was great too, but this blog post has gone on a bit long, so I'll tell you about that some other time.
Posted by Jongudmund at 07:31