Ah, the 1980s. A more innocent place for kids. The idea of that one day they might do Star Wars prequels was a source of hope rather than despair. When someone gave you 50p to spend, it was a big deal, mainly because it was a huge coin. And toys weren’t aggressively marketed by tie-in TV shows, at least until He-Man came along.
Action Force was probably the last great populist British toy line (since then we’ve been importing American and Japanese fads). It gave Star Wars figures a good run for their money, despite being made by the same company initially, Palitoy. A scaled down version of Action Man, my blue helicopter pilot figure from the first series is the first toy I remember buying when we came back from Africa.
The second wave of figures was split into the four components of the Action Force, and faced off against evil terrorist mastermind Baron Ironblood, now referred to in our house as ‘Bucket head’. Together with his Red Shadows, Muton robots, and later Kraken reptile beasts, this megalomaniac threatened to take over the whole world. Fortunately the might of Action Force, an international force of military experts who were bizarrely exclusively white, stood in his way, thwarting his evil plans.
Why the nostalgia? A few years ago I was well into collecting AF, but I hadn’t bought any for a while. Until today when, visiting a relocated retro toy store in the city centre, I found some carded figures, including three Q Force (the naval elite of Action Force) figures that I only possessed as loose figures before. So, it looks like I’m still a collector.
The slightly blurred photos don’t do them justice. For toy nerds, the Sea Skimmer figure was only released in the third wave of British figures, before the toy line got subsumed by Hasbro and marketed as the Euro version of GI Joe. All three cards have third wave backs and the mail in offer is the Skeletron. All three cards are in English and Italian, hence the Deep Sea Defender’s alter ego "Palombaro." 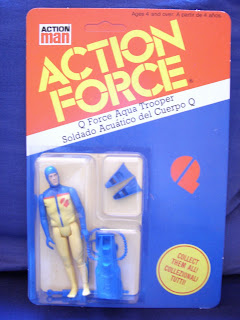 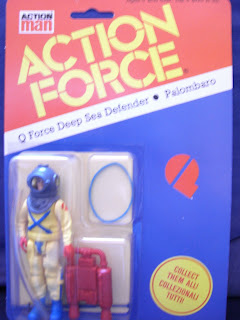 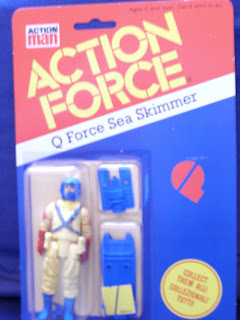