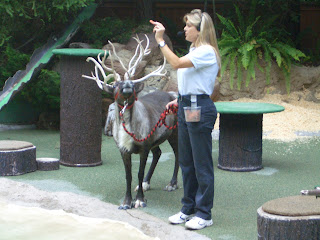 Something that Cath and I learned at San Diego Zoo is that boy reindeer lose their antlers in the autumn, while girl reindeer keeps her antlers until well into winter, so that they can compete for food. Which means... that Santa's sleigh-team is exclusively female! Which explains why one of them is called Donna. (And before the pedants attack - you know who you are - I know it's really Donner).

But this then leads to an obvious question. If Santa's herd of reindeer are all female, does he have to hire in a stud reindeer from time to time? Or is that Rudolph's job? And where have all the male reindeer gone? Is Santa a secret exporter of venison? Hmmm.

(If Santa turned one of his reindeer into a spitroast, would it be possible to have a real Donner kebab?)

The other thing about San Diego Zoo is that they had the first panda cub to be born in the Western hemisphere. When we saw it, it was sleeping in a tree, looking like a plastic bag that had been blown there by the wind. Apart from the fact it had a paw, of course. We saw pandas doing what they do most of the time. One was eating and two were sleeping. The reason they sleep so much is because the bamboo they exclusively eat is actually toxic to them, so they have to sleep off the toxicological effects. 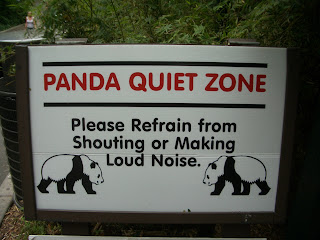 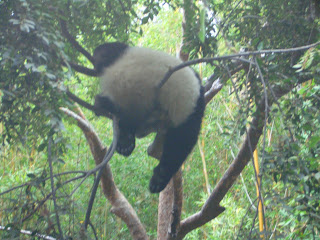 Playing "Spot the hippo!" with the friendly baby hippo 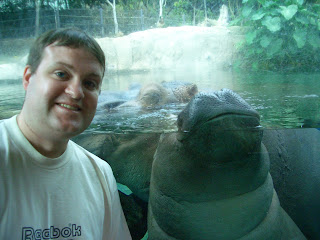