Various apps are annotating my life. I've blogged about the Futbology app previously. Recently it has started pinging me reminders of football matches I attended, and have logged on the app. These are similar to 'Facebook memories' that often come up related to stuff I posted dating back to 2007 when I joined the site.

My Futbology reminder on 5 September is for Newport v Wrexham in 2010. 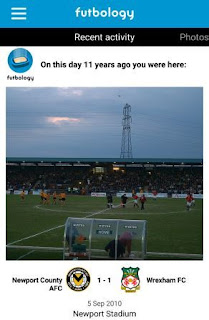 That's not a photo from the game in question - it's their generic photo for Newport Stadium where Newport were playing at the time.

What Futbology doesn't know is that the game was moved from the Saturday to the Sunday but I didn't know so I ended up at the empty stadium on the Saturday wondering what was going on. This was long before I carried a portable computer connected to the Internet in my pocket.

I had totally forgotten that aspect of the game, except that I got an aforementioned Facebook memory on 4 September that cryptically mentioned driving to Newport on a fruitless trip, and then the reminder today revealed why!

Facebook then handily provided me with these reminders of the action from the game, including a missed penalty. 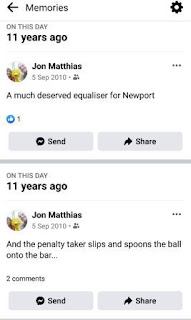 There were more updates about the game, with details I didn't remember. It made me think about how so many of our memories are now preserved online -  we are effectively outsourcing them. These are the memories of my "cloudgangers", as Douglas Coupland termed them. These digital versions of my life, stored on servers around the world, retain knowledge of the events that shape who I am long after I have forgotten them.

This does make me wonder if there is a statute of limitations on our cloudganger memories. We change as humans, but our preserved content does not change. Can it truly be seen as representative of us, when we are new people?

This made me feel slightly uneasy. Firstly, should we judge anyone as adults based on what they said or did as 14 year-olds. Most of us were dickheads when we were 14. Secondly, should we really hold people to account for opinions they held 9 years ago without checking in with them now? This blog has been running since 2006 - I have changed my mind about a number of things since I started.

The choice seems to be whether we delete the record and lose the richness of who a person is, their faults and failings in their history. Maybe we should seek to expunge everything that does not represent who we are in this moment, recognising that everything we commit to the servers now might be deemed expungeable in a few years' time.

But if we radically revisit our past selves and seek to remake them into versions we can accept, then we lose the sense of development that enabled us to reach the point we are at. We learn more from owning our past mistakes and explaining why we would do things differently now, than from pretending it never happened at all.

Otherwise our cloudgangers may be highly accurate replicas of us, but have no memories.