August was a month of football for me. I went to 11 matches, which is more in a month than I have managed in some seasons. I started with a trip across to Tremorfa to watch Grange Albion play their local rivals, Bridgend Street. And I ended my footballing month on the 31st watching Barry Town come back from behind to snatch a win with a penalty in the very last minute aginst Haverfordwest County.

Along the way I watched The New Saints play against a team from the Czech Republic in Cardiff, watched Barry play away in Aberystwyth and Cefn, near Wrexham, and managed a "twofer" with a Grange Albion game in the afternoon and a Barry game kicking off at tea-time. It was hectic. 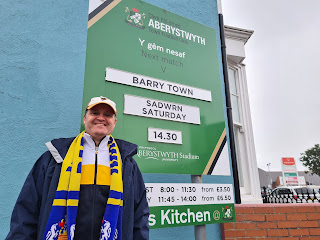 The Barry fans made a lot of noise at Aberystwyth - there was an interchange on Twitter where a local said they "could hear you in the pet shop", which would make an excellent slogan to stick on a banner some time. My friend Matt came with me to Aberystwyth, and after the game we went down and had a look at the seafront. It was a long day out, but it was a fun day out.

This past month we discovered a fast food franchise that does a decent vegetarian alternative. The KFC vegan burger just about meets Cathy's dietary requirements, and is a much better option than any of the meatless meals available at similar outlets. We have been restrained and not eaten too many of them.

I haven't had much free time inbetween a full work schedule and a full footballing schedule. However, I managed to finish reading a book! (One of the ones blogged about here.) My reading has taken a massive hit over the past year and a half. It's tempting to blame the pandemic because it seems to get blamed for every other disruption in life.

I found some time to build some Blood Bowl figures. I constructed half the team of lizardmen that I was given for my birthday back in 2020 (almost 18 months ago!) and I have high hopes to actually play a game this coming month!

My favourite player is the Chameleon Skink, who has a special ability to intercept passes, courtesy of his long tongue. Here he is, pictured in the act! 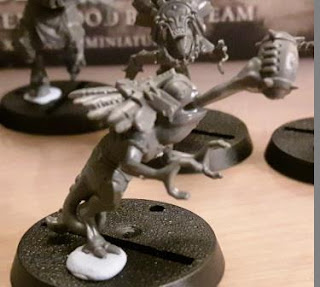 If the team gets a run-out in September, then I will let you know how he gets on!
Posted by Jongudmund at 21:37