It seems whenever I take someone new to see the mighty Shrews, the team don't live up to their 'mighty' name-tag and turn in a performance that can put you off football as a sport, let alone supporting Shrewsbury. It was thus when I went with a kid to his first ever football match last season. It was thus when I took my cousin for the first time in 26 years.

And it was thus today when I took my friend Connor to his first ever Town game, making him get up at an unearthly hour on a Saturday (well, unearthly for him seeing as he's a student), and drive 110 miles to see two teams struggle to do the basic things right. Like get shots on target. Or pass.

There were a few 'firsts' though. It was the first time I'd ever seen a matchball delivered by helicopter (from the local RAF station as it's poppy appeal time). I don't know how hard it is to land a helicopter in the centre circle, but they made it look easy. 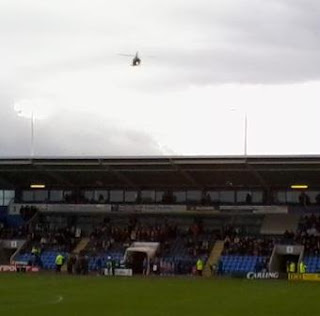 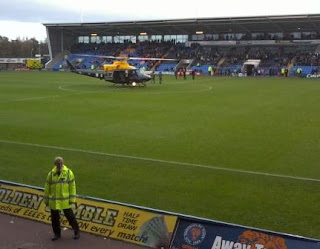 It was also the first time I'd ever seen an opposing team's fans applauded when they were announced.

AFC Wimbledon were formed by fans after the terrible FA decision to allow the original Wimbledon to 'relocate' to Milton Keynes and become the MK Dons. As such, they are held in tremendous esteem by most fans who care about football as a whole, rather than the exercise-in-branding Premier League team they've chosen to support this year. (Yes, I support a real football team; so sue me.)

However, I will hold them in less esteem from now on. I can live with the stifling 'come-for-the-draw' tactics that killed the game from about 10 minutes in. We've seen that time and again, and it was understandable that after shipping several goals and losing three on the bounce, they played cautious tactics. It's boring and frustrating to watch, but really it's up to my team to pick the lock.

But what I can't forgive is a player falling to the floor and clutching his face, rolling in simulated agony after his shirt was tugged gently by an opponent. That is shameful play-acting to get another professional sent off. Okay, it was one player, but it sullied the AFC Wimbledon name in my eyes. 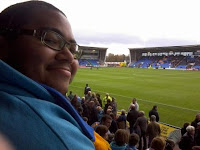 It ended 0-0. Not the greatest intro to the blue and amber for Conn as he sat there loyally wearing the scarf I'd leant him. Town were lucky Wimbledon hit the post after about 3 minutes, but the missed a few good chances and had a decent shout for a penalty turned down, so there were talking points. Just not many good ones.
Posted by Jongudmund at 23:20