Those following this series will know I have acquired a few things from my Dad. recently I was able to raid his boxes of stuff and install a few new pieces on my model railway.

I also brought home a railcar that Dad bought in the 1980s, just to see if it would run. Surprisingly it does, but the headshunts at either end of my lay-out are too small for it to traverse. But at least it runs. It's in a nice early BR maroon as well, so fits in with the other locos.

Dad had a couple of Cambrian wagons - another mainline one and one produced by Dapol.This rake looks pretty good on the surface, but you can easliy spot the same numbers on the side. I am considering how to go about altering them (or at least the ones on my Mainline wagon).

I borrowed a few other pieces of rolling stock. But also some vintage trackside pieces, including two water cranes, a loading gauge and some signals. 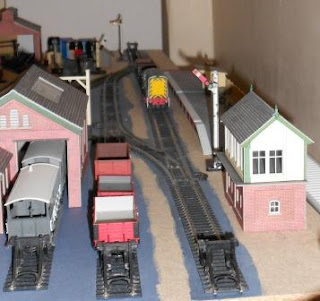 They are a mix of manufacturers, including Triang and Hornby Dublo, and date to the 60s, I think. Part of the ethos of building a heritage railway has been to include some 'vintage' pieces like this, so it's 'heritage' in real-life as well.

I plan to build a water tower to back on to the water cranes, which I've placed together to function as an 'exhibit' in the heritage centre.
Posted by Jongudmund at 22:37