Reliving my childhood through retro packaging

I made an impulse buy in the supermarket tonight - a Star Wars figure on a retro style backing card that reminds me of buying them first time around back in the 1980s.

Having only returned from abroad in 1983, I only ever bought Star Wars figures on the Return of the Jedi backing cards. A whole load of the figures I had back in the day have been retooled and re-released now, including Luke Skywalker in his Jedi Knight outfit, and the Gammorean Guard from Jabba's palace.

I could leave those ones, but when I saw my favourite space admiral ever, I had to have it! Altogether now: "It's a TRAP!" 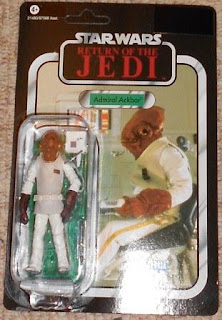