I get a lot of questions about this audit, mainly along the lines of 'Are you going to do your audit again this year?' It seems to be the most interesting thing I do, which, now that I think about it, doesn't make me sound like the most thrilling person on the planet. (And quite a few people are deliberately sending me cards trying to bugger up my categories. I know who you are.)

But I do find this sort of thing interesting. The trends. Why are the rich, well-dressed three kings of the Orient so much more popular than the smelly shepherds? Why do religious Christmas cards almost never mention Christmas? Why are penguins perennial paradigms of Christmasness? What happened to all the dogs in Santa hats (none again this year!) The numbers. The charitable causes. The glitter.

Can I have a word about the glitter? It's incredibly bad for the planet. But never mind that, just when I've finally managed to hoover every stray bit of tinsel and fake green bits off the tree (why do plastic trees shed?), I then have to take down the Christmas cards. Glitter doesn't stay stuck. It's one of the laws of physics, I think. (Maybe I should have paid more attention in science class. If it's not a law, it should be.) Or rather, it doesn't stay stuck where it should, so I now have a glittery carpet, glittery socks, glittery thumbs and by the end of this, a glittery keyboard too, no doubt.

I'll get to the stats in a minute, but first something we've never received before - a very early Christmas card that doubled up as an advent calendar. 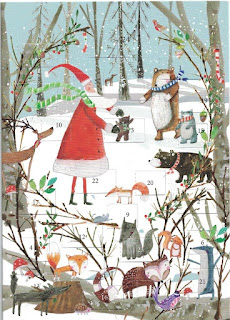 And so, on we go. New categories are asterisked.

Hand-made / home-produced cards: 7 (same number for the fifth year in a row)
Cards designed by kids: 5
Cards with glitter: 17 (exactly the same as last year)

Cards sold in aid of charity (or fundraising):50
Total number of charities represented: 36
Most popular charity represented: British Heart Foundation were the winners this year with 6. Cancer Research UK and the Traidcraft / SCIAF / CAFOD / Christian Aid combination were joint second with 5.

Religious themes
Religious-themed cards: 30 (down 1 from 2017)
Cards featuring the Nativity: 15 (down 1 from 2017)
Christmas story 'characters':
Three kings: 6 (same as last year)
The shepherds: 1
The star of Bethlehem: 1
Angels: 1
*Choirboys: 3 (All three looked very much alike - groups of choirboys in red and white robes standing outside a village church in the falling snow.)
'Cartoony' religious: 1

Other themes
Santa: 6
Penguins: 3
Bears: 1
Deer/reindeer: 1
Christmas decorations: 2
Christmas trees: 6
Christmas food: 4 (mainly Christmas puddings)
Robins: 2
Donkeys: 1
Sheep: 3
Winter scene/scenery: 3
Snowmen: 5
Licensed characters: 0 (no Star Wars cards this year)
*Llamas: 1 (Cathy wanted this as it's own category, even though it's really just a Peruvian deer)
*Hares and Moons: 2 (This year's 'dogs with Santa hats' type of trend, maybe? But less joyful. Because a dog in a Santa hat is always fun, even if it's a grumpy pug. but hares by moonlight look a bit mournful.)
*Holly and wreaths: 3

Messages (front of card only)
Cards that mention 'Christmas' on the front: 30. Only 6 of them were religious themed. This just confirms my annual observation that religious themed cards don't use the word Christmas. Also 1 card saying Nadolig Llawen.
"Seasons Greetings": 1
Mentions "Jesus": 0 but 1 card did have "Emmanuel" on it
Bible verse: 2 (Well, kind of. They both said "unto us a child is born" which is a Bible verse, but neither had a Bible reference saying where it was from. But I'm going to count them because otherwise there would be zero.)
*Lines or titles of Christmas carols (including) "Joy to the World": 7
*Lines or titles of Christmas songs: 3
Previous years:
2012
2013
2014
2015 plus 10 favourite cards, senders analysis and Bible verse breakdown
2016 plus favourite cards
2017 plus a dozen favourites and Christmas carol audit
Posted by Jongudmund at 22:15