25 years of football - my top 5 most memorable matches

I recently blogged about my own football-going records, covering 25 seasons of going to games. It's kind of hard to pick out the best games, or the most memorable. There are some I will never forget. Here are programmes (and some photos) for five matches I went to that I think are the ones I will remember forever.

It was a game on my birthday - always a bit special, that. My sister-in-law, Abby, had bought us really good tickets quite close to the pitch. So close we could see Alan Shearer doing his shouty, pointy, bossy stuff, and Graeme Souness glowering in the dug-out. Kieron Dyer was Newcastle's highest paid player. The woman behind us didn't rate him. "He's too fancy for me," she said. "Too fancy!"

Too fancy! has become a bit of an in-joke for me and Cathy. 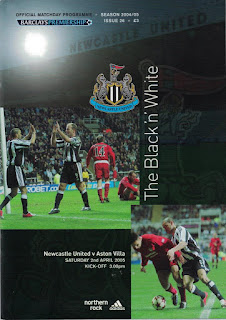 This game itself has become legendary. Newcastle had three men sent off. Two of them - the "too fancy" Kieron Dyer and wannabe thug Lee Bowyer were sent off for fighting each other. The third, Steven Taylor handled the ball on the line, and then collapsed holding his chest in a laughable attempt to fool the referee. Aston Villa won 3-0. They were already leading when Dyer and Bowyer started trading punches.

They were properly swinging as well. None of this brush a guy's cheek and he falls to the ground clutching his face nonsense. They'd have done ice hockey proud.

In the programme, there's a bit about how the game brought Bowyer "into conflict" with his former boss David O'Leary. 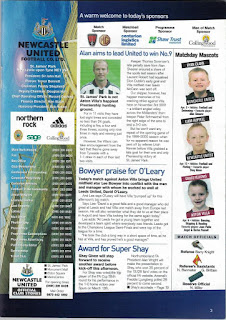 That may have been true, but it brought him into more conflict with Kieron Dyer.

I remember leaving the ground, trying hard not to stand out as a non-Geordie in a seething sea of very, very angry Geordies. There was a palpable sense of repressed fury in the crowd. It just needed a spark to erupt into a riot. If that had happened, St James' Park would have been ripped apart and we'd be talking about the day two Newcastle players were lynched by their own fans. 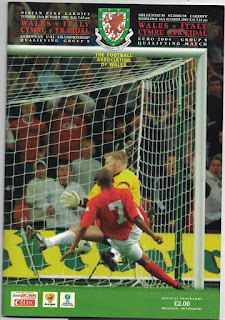 Wales scored first. Italy equalised from a soft free kick. But then Craig Bellamy scored what proved to be the winning goal. I remember the headrush from leaping up when the goal went in.

This was part of the campaign for Euro 2004 that saw Wales miss out in a qualifying play-off to a Russian team later exposed as harbouring drug cheats. Given everything that's come out about Russia since, that shouldn't be a surprise.

Wales were a team much greater than the sum of it's parts. Here's the squad for the game. There weren't many stars in it. 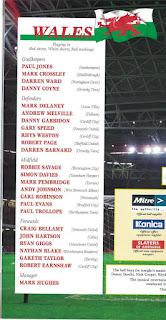 By contrast, this is Italy's squad. Less than four years after this game, Italy won the World Cup. Again. 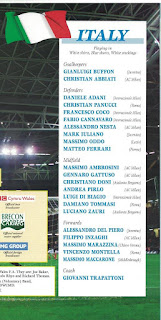 Shrewsbury v Everton - 4 January 2003
Two games from the same season make my top five. This was an FA Cup match from the era when tickets for football matches looked like this: 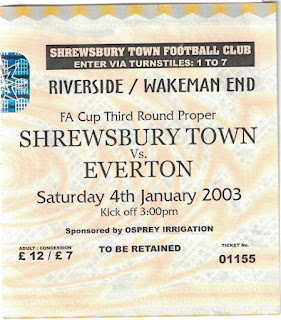 Not a bar code to be seen. 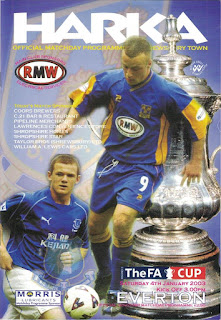 I was on the Riverside, which was the side of old Gay Meadow that backed on to the river. It was a long roofed terrace and it was rammed for this game. I don't remember much of the football. There was a crowd surge when Shrewsbury scored the opening goal - a Nigel Jemson free kick that Richard Wright completely screwed up. Niclas Alexandersson scored an equaliser for Everton. He was a squad member getting a rare run out. (I'd ask whatever happened to him, but that would just be sad.)

The surge I really remember was the one when Nigel Jemson scored with a header in the second half. If you've never stood on a packed terrace you may never have known that sense that suddenly you aren't yourself any more. You are travelling as a mass, forwards, cresting on a wave of fellow fans. It doesn't matter of course because you are yelling and hugging your mates, and just loving the moment.

Unless your name's Mike and you're an Everton fan in the home end with us, and this is probably one of the most painful football experiences you will have. (Probably not, really. He is an Everton fan after all.) Yeah, it really sucks to be Mike that day. But for the rest of us, woohoo!

Again, a squad comparison. This was the Shrewsbury team that would get relegated out of the football league at the end of the season, eight points adrift of the second bottom team. 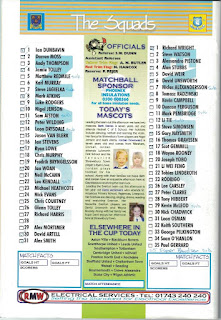 Kevin Ratcliffe has not worked in management since the end of that season. He tips up now and again on BBC Wales as a pundit. David Moyes brought his West Ham team to Shrewsbury's new stadium in January this year for an FA Cup game. It finished 0-0.

The Riverside got demolished a couple of years later. They built yuppie flats on it.

I'm still friends with Mike. He'll likely read this. DO YOU REMEMBER THIS GAME, MIKE? 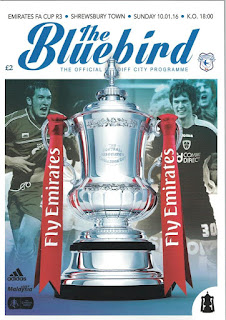 Another FA Cup game. I've got to include this because I'd seen Shrewsbury play Cardiff three times in Cardiff and never win. The first was a Cardiff City promotion party that was curtailed slightly early by the referee because of crowd encroachment on the pitch. The second was a midweek game that I remember mainly for a Shrewsbury fan being hit in the eye by a coin thrown from the Cardiff fans. The third was a hammering that I watched from the away terrace behind the goal nearest to my house. All three were in the third or basement division.

This was the fourth time I'd seen Shrewsbury play Cardiff in Cardiff, but the first at their swanky new stadium. They were a fancy dan Championship side now, having just spent a season in the Premier League no less. It was also live on S4C on a Sunday night which might explain why almost nobody turned up. Seriously, it was empty. This was the home end: 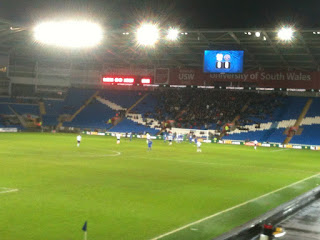 And Shrewsbury won! 1-0 with a smash and grab bundle-it-over-the-line goal right in front of us in the away end. Oh how we celebrated! Me and Steve and Connor and John! Good times!

My friend Nigel, caught a still of us all intently watching the game from the S4C coverage.

This! This is how you watch a televised match. None of this waving at the camera really excited like.

Paulton Rovers v Poole Town - 25 October 2014
I've included this one because a game doesn't have to be a team full of stars for a match to be memorable. 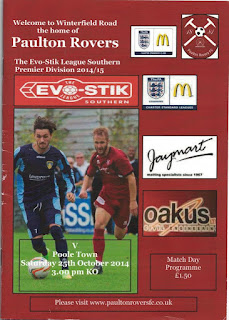 My friend Steve is a Poole Town fan and he has taken me to a few places to watch them play. Glamorous places like Merthyr, Weston-Super-Mare, and even Poole itself. But few places feel as out of the way as Paulton Rovers. I'm still not entirely sure where Paulton is and I've looked it up on Google Maps. It's somewhere nearish to Bristol. Or Bath. I think. 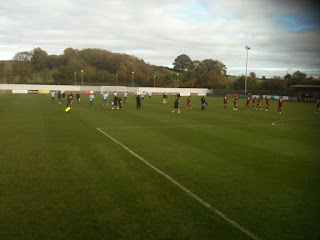 It's in the country. 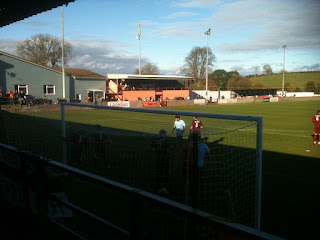 You can get very close to the goals.

So, why is this memorable? Well, it was one of those games, you know. Paulton were soon leading 2-0. Then Poole pulled it back to 2-2. Then Paulton scored again twice, either side of half time. Poole got another goal back, then won the softest, most dubious penalty ever to make it 4-4. Then with barely minutes to go, unbelievably went ahead and ended up winning 5-4. A very exciting game, and proof that entertainment can be had wherever you end up watching football.