25 years of football - some Shrewsbury highs and lows

I've blogged recently about 25 years of watching football, with most of the games being Shrewsbury Town games. I've seen a few highs and plenty of lows in that time, or, as the joke goes, I've stuck with them through thin and thinner.

The second season of my record-keeping (1993-94) was a promotion year. Which is why I'm beginning this round up in the sunny glamour of Rochdale. 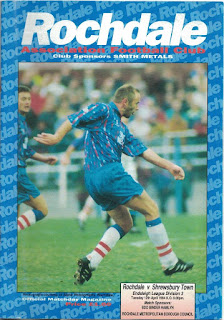 My friend Jim was the reason I went to Rochdale. He convinced me it would be a good idea for us to go on a supporter's coach for a regular Saturday away game. I'm not sure if we were a couple of miles from the ground, while we were mired in the traffic you get mired in when you visit Northern urban sprawls, that we heard that the game had been called off, or whether we had actually arrived at the ground. Anyway, after three hours on a bus, we basically got back on the bus for a three hour ride home. I don't remember much about Rochdale, except that it seemed like the biggest post-war council estate I had ever seen. The only other memory is when the bus pulled over next to a canal for a large contingent of men to cheerfully relieve themselves straight from the bank, oblivious to the cars trundling past behind them.

We had paid for the coach seats, so got to go to the rearranged fixture for free, on a Tuesday night.  Rochdale away in 1994, is a legendary game amongst a certain generation of Town fans, however. Because Rochdale away is the game we went top of the league for the first time that season. And I was there.

Thanks to my habit of the time of defacing programmes, you can see that Dave Walton scored the winner right at the end of the match. I remember having a restricted view from the terrace and not really seeing the goal. But everyone went nuts so I joined in. 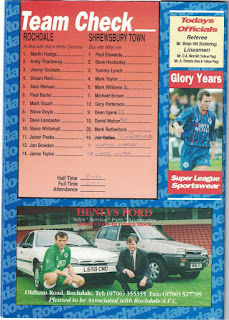 This is the programme from the final game of the season. It's a promotion special, not that you'd know from the cover! We played Wigan Athletic, one of those perennial minnows that have never really done very much. 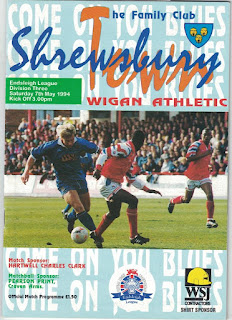 And the table. confirming we were champions. This was a time when programmes included average attendances for all the teams in the league, and even ordered them in the table. You can see how Shrewsbury had the 5th highest gates in the league, while the day's visitors, Wigan were second from bottom. That must be why they've never really done anything.

In all seriousness though, whatever you think of Dave Whelan, this is where he started from. Lots of people throw money at football, but to take a club from this level and into the Premier League requires a certain bit of nous.

In another aside, four teams in the table, including promoted Chester, have since gone bust and had to reform way down the pyramid.

Of course, Shrewsbury built on that success to establish the club as a formidable force in football. Why only less than 10 years later, they were relegated out of the league altogether. 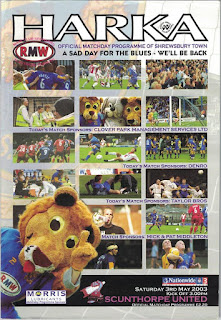 'The Scunthorpe connection' was a nice bit of book-ending. Shrewsbury and Scunthorpe were both elected to the football league in 1950 and played each other on the opening day of the Division 3 (North) season that year. It was kind of fitting that they played each other on Shrewsbury's last day in the league as well. We didn't have time to miss each other, though, as the clubs were drawn against each other in the first round of the FA Cup the following season.

Rochdale make another appearance in this blog post. Town bounced back into the league at the first time of asking, and had a new star in the making to boot. I saw Joe Hart play twice for Town - away at Cheltenham, and against Rochdale on 6 August 2005 - the opening day of the season 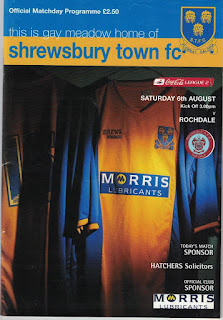 Team line up. He was our Number One. 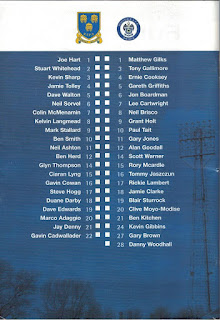 And there he is in the team poster as well! 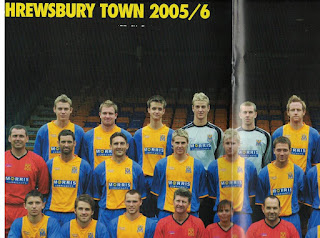 There is a nine month gap in my football-going during that season, from a Wales game in early September to a summer England friendly the following June. In the November I was signed off work with depression and spent the next few months getting my head back. I didn't see Joe play for Shrewsbury again and when the next season rolled round he had transferred to Manchester City. (I have seen him play in Shrewsbury since, in goal for West Ham United in the FA Cup third round this season.)

Shortly after Joe left Gay Meadow, Shrewsbury also left, for a new stadium. I found these in my box of programmes. 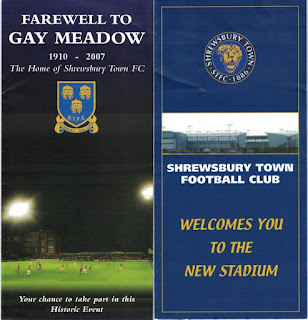 You don't have to be a silly sod to support Shrewsbury Town, but you could have bought one.

The final season at Gay Meadow ended with a trip to the new Wembley stadium in the play offs. I actually watched the last game at Gay Meadow in a pub round the corner from my house. 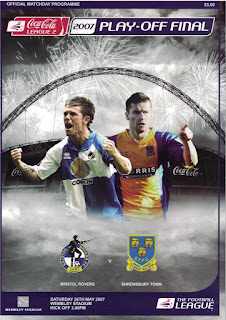 Two years later we were back. 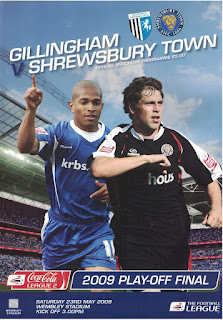 Yes, that is Grant Holt on the cover. One of the best strikers I have ever seen in Shrewsbury colours.

Unlike the previous play off final, when we were chasing the game for most of it, this time it was nil-nil until the very last minute. Then Gillingham scored. Town kicked off and the referee blew for full time.

I said at the time it was like a punch to the gut. I can still feel the visceral emptiness as if someone had reached in and torn all my emotions out through my bowels. I'd never felt like that before at a football match.

I remember looking at my mum and dad, shrugging, turning away and trudging up the steps to leave. Just numb.

On a lighter note. Some fun league cup games that we lost but it didn't feel like we lost. 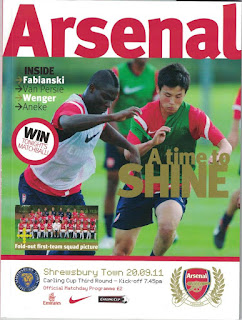 Arsenal was where I bought my first half-and-half scarf.  I MAKE NO APOLOGIES FOR THIS. 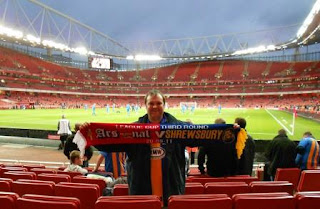 Town took the lead through James Collins. At this point, the Town fans started singing 'You're Getting Sacked in the Morning' at Arsene Wenger. Spoiler: he wasn't. 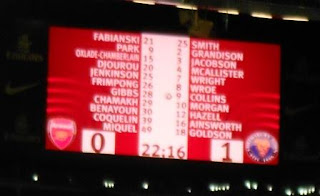 The Emirates is by far and away the best football stadium I've been to. And, hilariously, the crowd there is the biggest crowd Shrewsbury have ever played in front of, and I think it's possibly still the lowest attendance ever at the Emirates.

A few years later, Jose Mourinho came to the New Meadow with Chelsea. I've yet to see a proper Shrewsbury giant-killing in the league cup. This was close. 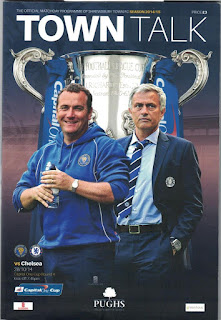 Chelsea led early on, but then Shrewsbury got into gear and grabbed an equaliser. The momentum was with the Town, so Mourinho brought on his real players like Willian. A few minutes later a Shrewsbury defender slipped under pressure and spooned the ball off his knee past his own keeper.

Fun fact, Mo Salah, this year's goalscoring dynamo, was playing for Chelsea. He was shocking. At one point he had a shot at goal from the edge of the eighteen yard box that went out for a throw in nearer to the halfway line than the corner flag. He got subbed and very soon after this game was sold.

Fun Fact 2, in a media interview afterwards Eden Hazard forgot who he had been playing and called the team 'Strawberry'. It was quite funny, really.

So, that's a round up of some of the highs and some of the lows. I didn't mention the conference play off final that Shrewsbury won on penalties to get back into the league. Because I didn't go. It was on a Sunday and I was scheduled to preach in the church that Cathy and I went to at the time. I also haven't mentioned the Auto Windscreens Shield final against Rotherham in 1996, because I didn't buy a programme so had nothing to scan. And they lost anyway. My Dad still rants on about how the manager, Fred Davies, picked the wrong team that day.

But that's the reality of following a team like Shrewsbury. The triumphs are hard fought. The disasters are one bloot off a defender's knee away. The line between glory and muddled obscurity is a mighty fine one.