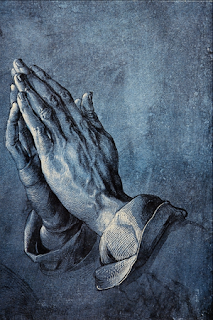 A couple of Sundays ago, we had another example of 'telling a dubious story to illustrate a sermon point'. This time it was about Albrecht Durer's 'praying hands' drawing.

The story goes that Albrecht came from a large family and had one brother in particular who was also an aspiring artist. They couldn't afford to both to university to study art, so they flipped a coin and Albrecht won. He went to art college while his brother worked to support him and five years later he came back home to work while his brother went to college, except that his brother's hands had been ruined by the rough manual labour of the last five years and so he couldn't go. Albrecht then drew his brother's careworn hands and they became the 'praying hands'.

The moral of the story is one of faithfulness and sacrifice and enabling others to achieve their dreams. Which is fine and dandy except that, like the Itzhak Perlman story I wrote about, it annoys me when people draw important life lessons from stories that aren't true.

It didn't ring true for me firstly because I'd heard the story before, except that time Durer's brother ruined his hands working as a shepherd. This time round it was down the mines. When details like that change, it makes me suspicious that I'm hearing an urban legend.

Durer's life is fairly well-documented for someone who lived over 500 years ago. For starters, he didn't go to university to study art. At 15 he became an apprentice to a local artist and engraver. Yes, he had a lot of brothers, but that was common in those days. The 'flip a coin' plot device was pretty unlikely. (Albrecht's brother, Hans, also became a famous painter.)

The artwork itself isn't considered one of Albrecht's finest. The 'praying hands' we have is a preparatory sketch for a piece of work known as the Heller altarpiece, which was destroyed in a fire in 1729. Durer painted the artwork when he was in his thirties, long after he would have returned from the mythical university. Presumably he waited to paint his brother's hands so they could get even more battered and holy-looking... except the hands in the 'praying hands' aren't the hands of a manual labourer. They are manicured, long-fingered and show no signs of arthritis. Experts think they belonged to a professional hand-model of the day - and some people even think they know who it was.

So, where does this story come from? The earliest provenance I can find for the story on the web is, unbelievably, a book written in 1990 called A Better Way to Live by American self-help guru Og Mandino. From there it has presumably made it's way into the chicken soup for the soul end of the web, and ended up as a sermon illustration. I have no idea where the international art historian motivational speaker Og Mandino got the story from. I plan to email his disciples.

But, on a more serious note, this is a story that is circulating, and was preached in a church to illustrate supposedly timeless truth, without any credible evidence. It didn't take me long to find out the story is baseless. (One quick trawl on Google in a lunch break.) But the thing is, as I've said before "if we’re just making shit up, then where do we draw the line?" Stories of healings, miracles, stuff like that? Your testimony, Mr Preacher?

I think this sort of thing matters. If you claim to have a truth that will set people free, then you don't need schmaltzy stories to sell it. And if you don't check that what you're saying about historical facts that can be verified is true, then how can anything you say about matters of faith that can't be historically verified be considered reliable?
Posted by Jongudmund at 22:51