I like going to quirky football matches. My friend Matt lives in Neath. Neath FC play in the Welsh Premier League. We decided to go. It was pouring down in the morning and we almost ducked out. But then the sun came out and a gloriously sunny afternoon provided the perfect backdrop to a game of football that only occasionally rose above the mediocre, but was quite entertaining nonetheless. 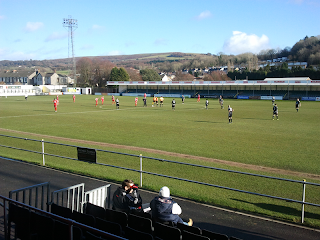 Non-league, local football is about grass roots atmosphere. There is always a cute teenage girl selling programmes. There is always someone who brings in their own supply of food - the lad in front of us who ate an entire family-sized packet of hobnobs in this case. Tea is always served in styrofoam cups that allow the heat from the liquid to burn your hand off. People are friendly, stewards are funny, there are no police, there's banter between the fans. I love it. Neath's star player is Lee Trundle, one-time Swansea City 'legend' and now knocking the ball about in a competition somewhat below his true level. His skills and touches set him apart from every other player on the pitch, most of whom looked like decidedly ordinary unathletic blokes. He was surrounded at the end - the only autograph the kids seemed to want. 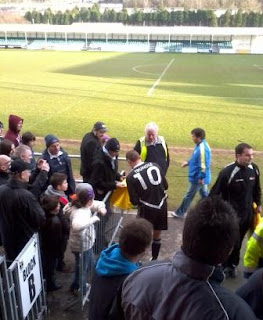 The most unathletic player was the opposition goalie. Looking at him you could believe he'd have his win bonuses paid out in toblerones. He wasn't a bad stopper though, getting down smartly to two free kicks from Trundle that would have tested most keepers, and pulling off a very good save at his near post in the first half.

Neath won 1-0. They should have had more. But Prestatyn fought hard and kept going even when they finally went behind late in the second half.
Posted by Jongudmund at 21:21