2 recent films: Super 8 and Rise of Planet of the Apes 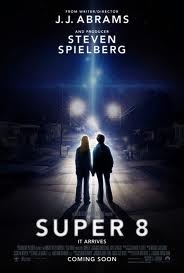 Super 8 is proof that Steven Spielberg has been making the same film since the late 1970s.

First the good part - it's got some good pre-teen actors playing the young protagonists. However, apart from the fact I went with my good friend Connor to see it, there isn't much else I can say.

This is seriously Spielberg by numbers. It's set in the late 70s about a group of kids who find an alien who wants to go home (Close Encounters / ET). At one point they are trapped in a vehicle at night that is being attacked by a large beast (Jurassic Park). The military are after the alien for their own ends (ET). There are tunnels under the town (The Goonies / Temple of Doom). The main adult protagonist is a small-town sheriff (Jaws). There is hardly one original element here.

Except he's teamed up with JJ Abrams, the creative behind Lost, Alias, the excellent Star Trek reboot from a couple of years ago, and, er, Cloverfield. Which might be why the alien in this movie looks less like ET and more like the bastard brother of the thing that attacked New York, crossed with a spider. The only other thing Abrams brings to the party is unneccesary screen glare at every opportunity. It's his trademark. 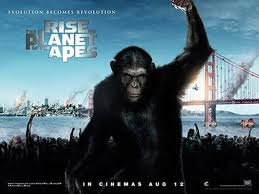 And so to Rise of Planet of the Apes, which is onto it's second reboot after the messy Tim Burton attempt, that even he admits went awry. Unlike the 2001 film, the 2011 one got most things right.

It's interesting that in the original films the audience was expected to side with the human hero. It perhaps shows how in a generation we have generated a racial self-loathing that puts the ape, Casear, at centre stage and has you rooting for them.

There were two stand-out moments for me. The first was when Caesar realises that he is being treated like a pet and reacts by getting into the back seat of the car instead of the trunk. The second was when Caesar was given the opportunity to leave the Guantanamo-like primate 'sanctuary', but chooses to stay with his ape brethren rather than return to a servile life.

There were weaknesses. I'm not sure how the intelligence-boosting toxin that boosts Caesar's brain power also enables him to evolve human-style vocal chords. Also, when the apes break free from the sanctuary there seem to be an awful lot more of them than you ever saw in the cages.

But apart from those mild gripes, I really enjoyed this film and would thoroughly recommend it: 9/10.
Posted by Jongudmund at 22:30