Cathy is a fairly keen follower of America's Next Top Model (on right now as I blog this on Living TV).

One of the judges on ANTM is J. Alexander, otherwise known as Miss Jay. He's very amusing and, er, flamboyant, I guess. (Old school types will probably mutter that he's more camp than a row of tents...)

Anyway, this series he has a fairly daft-looking 'bowl cut', which looks like this: 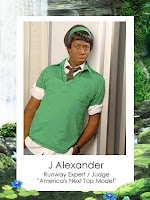 The official pic doesn't really do it justice. But in the show, when he's moving around, he really reminds me of someone... who could it be... oh yeah!

(If you don't believe me, watch ANTM followed by a classic Dibbley episode of Red Dwarf and tell me that's not the same haircut.)
Posted by Jongudmund at 21:01