It's been several months since I joined in on a Tidy Grangetown litter pick. This time, Fiona, who is one of the stalwarts of the group recognised me as the chap who wrote a blog about it. (Looking back, I've actually written two!)

This time round we were meeting by the Channel View Leisure Centre, which is right next to the River Taff. Dave from the Cardiff Rivers Group, who brings all the bags and holders and litter grabbers and gloves and high-vis vests, suggested I go explore down by the water-sports slipway where a lot of rubbish had washed up.

In doing so, I met a new friend. 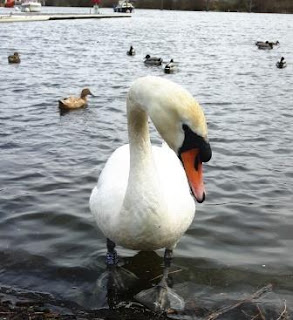 He was a very friendly swan who seemed very interested in what I was up to as I fished various bottles out of the water. There were lots of ducks around who weren't as interactive and minded their own business a bit more. 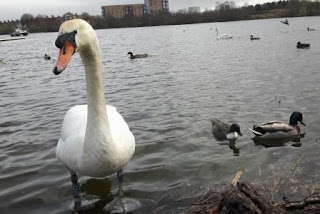 After having a nice chat with the swan ("Hello, Mister Swan, don't worry, I'm just picking up all this plastic crap, no, don't try to eat the plastic crap...") I walked through The Marl to Ferry Road. At this point the sun had come out and it had turned into a lovely spring morning.

In The Marl I found the obligatory lost toy who had clearly lost his latest duel with Batman. 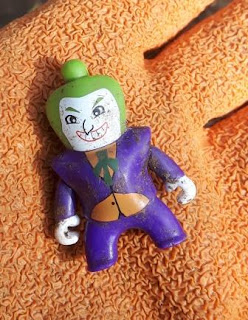 On Ferry Road I found a magnetic 'L plate' that probably dropped off a passing car and a smashed in, backless mobile phone. 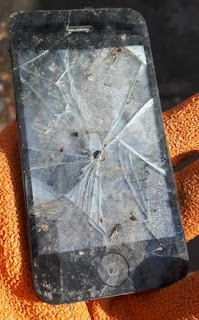 During the pick, I found a ziplock bag full of dodgy looking self-rolled smokes, nitrous canisters aplenty, and my first syringe. It didn't have a needle in it, although one of the other volunteers did find a syringe with a needle intact. As I have blogged before, you learn a lot about a neighbourhood by picking up its trash. People seem to lose their socks around here, for example.

And another first! I fished a Tim Horton's cup out of the river next to Mister Swan. The latest coffee chain to hit Cardiff have only been open a couple of months, but already they are following the lead of Starbucks and Costa in selling their wares to litter-bugs. Tsk!

At the end of the litter-pick we were invited into the Leisure Centre for a cup of tea as a thank you. Channel View is the only leisure centre in Cardiff that is still run by the council; all the others have been privatised. The centre is having a refit which will triple the size of the gym and provide a picture window view over the river, which will make it a much nicer facility to use. Work is due to complete by the end of April. I'm looking forward to seeing it.
Posted by Jongudmund at 20:46