One of the things I do occasionally - when the fates and free time at the weekend allow - is join the community litter-picks in Grangetown organised by Cardiff Rivers Group. This is far less boring than you might think and I've learned quite a bit from my experiences.

Archaeologists and anthropologists (and Wombles) can tell a lot about cultures from what they throw away and the discarded stuff on the streets is similarly illuminating. A couple of Saturdays ago I went along and was directed by Dave from the Rivers Group to go inside the Bowling Green and fish all the cans out of the hedge. Walking alongside the hedge to the entrance I thought Dave must be mad. There were no cans to be seen in the thick leafy healthy hedge. But inside it was a different story. The hedge was full of cans that had been shoved in from the street side and were hidden away.

I pulled out almost a full bag of cans, the oldest a faded Coke can in London 2012 Olympics livery, along with other rubbish and to crown it all (literally) the top of an artificial Christmas tree. 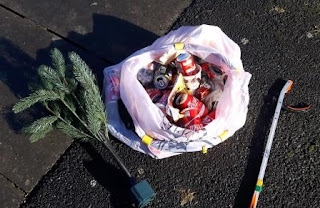 Coke cans are generally OK to pick up. The ones you have to watch are cans for disgusting energy drinks like Monster and Relentless. Those are always pretty much full when they are discarded, as if the teens buy them, take a swig and realise they taste the way a tramp's armpit would, and lob the mostly full can into the nearest bush. Or maybe they get a super burst of energy from the caffeinated swill and experience a full body spasm that causes them to launch the can reflexively away from their body as a survival instinct against drinking poison kicks in. Top tip: drain the can of it's nasty toxic contents before putting it in your bag.

Fag ends are even more annoying pieces of litter. They are fiddly to pick up with the litter-picking claws that Dave loans out from his truck, If you needed evidence that smoking is an antisocial vice, then it's all over our local park because it's not just the butts that smokers chuck. Fag packets and empty lighters get lobbed into the bushes, even though there is a bin right next to the bench where the smokers obviously puff away.

You don't get much evidence of other drug use, except for the nitrous capsules. These are metal or shiny plastic containers shaped a little bit like lighters with a screw-thread on one end. They never appear alone. If you find one under a bush, you'll find 10. Compared to the nitrous, the occasional empty baggie or rizla packet is a rarity.

And then there are the odd finds that also tell a story. The skeleton of a broken umbrella, turned inside out by the wind and chucked over the park fence by someone who has finally lost their temper with the thing and given it up as a bad job. (That was tricky to get in the bag without tearing open the sides on the spokes.) And then there are the untold and unknowable stories. What happened to the other half of the bed frame found lying in a kerbside gutter? How much money did that person spend on the lottery scratchcards now in the flowerbed, and did he win on any of them? Where is the rest of the Christmas tree?

That's my neighbourhood. A few kids do nitrous, but most can't finish their energy drinks. Smokers sit in the park and litter when they smoke. Some people put their hope in a lottery win, while others shove their Coke cans in the hedge. And Christmas is over when the decorations get dumped.

But the neighbourhood are also out on the sunny streets, and in the muddy borders of the park, picking all this crap up. And that's the Grangetown I love, because the kind of people who give up a couple of precious weekend hours to pick up rubbish and make the place a nicer space, are the kind of people you would want to spend a couple of hours with. There is an unselfish goodness at the heart of this activity that leaves me smiling for the rest of the weekend.
Posted by Jongudmund at 07:12