Films about the struggle - comparing Selma and Suffragette 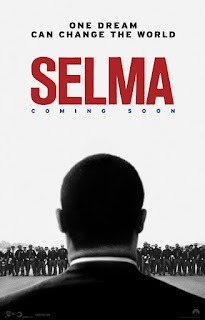 Selma is about the civil rights actions of Martin Luther King and his supporters in the town of Selma, Alabama. I saw it earlier this year and it has stayed with me as a powerful movie about a very unsavoury aspect of the American psyche - ingrained institutional racism.

This past week I saw Suffragette, a new film about the suffragette movement that campaigned for equal voting status for women, and wider equality in society.

Both films are naturally sympathetic to the cause of equality, and are filmed mainly from the point of view of the campaigners. Both are about giving an oppressed group in society the same level of rights as the oppressing group, and the actions of the oppressors to preserve their privilege.

What is different is the course taken. An interesting aspect to the film, Selma, is that it could not use any of Dr King's original speeches. They are all copyrighted, so the film-makers had to create ersatz copies of them, capturing the gist and thrust rather than re-voicing one of the most well-known voices of a generation. But one thing that came through time and again was the repudiation of violence, despite the brutal and terrible violence meted out by the racist police force and white redneck citizens. Dr King was arrested and humiliated, threatened and harassed, but stood firm in his commitment to the path of non-violence. 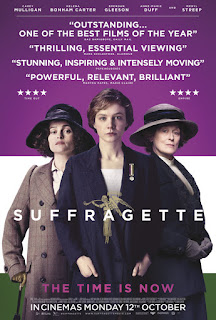 The suffragettes, as captured in the eponymous movie, spent 50 years campaigning for equality using peaceful means. However, the movie captures a time when they had given up on hope of a peaceful recourse and had turned to violence, including blowing up the Prime Minister's summer home that was under construction. They had an interesting approach to violence, targeting property, from breaking shop windows to destroying post boxes to disrupt lines of communication, rather than people. Their ultimate assault on property was against the King, with a suffragette taking down the King's race horse in the Epsom Derby, in a fatal encounter that was captured on newsreel film and became sensational.

While Selma is a study of staying true to your principles despite intense provocation, with some characters talked down from the brink of violence, Suffragette is a movie about how ordinary people can be radicalised by the struggle. The heroine, Maud, goes from a downtrodden, abused worker in a hellish laundry to an anarchist bomber over the course of the movie. It would be interesting to see the reception for this exact same plotline if it was contemporary and the lead character was a Muslim.

But this was all a long time ago and the suffragettes won, and so we assume it was all OK. And yet my Grandma in law was born when women still didn't have the vote and she is still alive. This wasn't that long ago, and the actions of the suffragettes would be branded terrorism today. Similarly, the civil rights marchers 'won', although events in Ferguson last year and the #BlackLivesMatter campaign seem to show there is a way to go for white America.

What Selma left me with, and what Suffragette has reinforced, is a sense that I'm not sure what my struggle would be. There does not seem to be an obvious cause like women's rights or racial equality. (At least not to the same degree; I know we aren't there yet.) Maybe I should count myself lucky to not live in an era and a society where I am called to put my body on the line and risk a baton to the head for my beliefs in justice and equality for all. My worry is that I am living in that era and society but I have somehow missed the call.

I also don't know what my breaking point would be. If Dr King had lived and led the movement for 50 years and had got nowhere, would he have finally given in to endorsing violence as Emmeline Pankhurst did? How long would I remain true to pacifist principles? What provocation would I endure?

These are big questions. I'm grateful to the movie-makers for making me ask them.
Posted by Jongudmund at 21:20