I've talked about the decline of the high street on this blog before. Here’s another example of how despite my best efforts I ended up resorting to Amazon.

This story begins with a young boy called Joe who began playing in goal for the Shrewsbury Town youth team. A few years later, after breaking through to the first team, a big money transfer, and becoming England’s number 1, Joe Hart has now been replicated in plastic as a tiny Soccerstarz model. 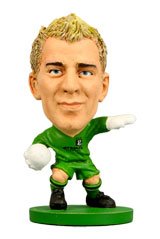 The 1 inch England’s number 1 was released at the beginning of May and I wanted it for my embryonic collection that Cathy refers to as my ‘Shrine to Joe’. I had a hunt in the toy shops in town, and the out of town Toys R Us, plus one or two other places I thought might have it. WH Smiths stock the first wave of SoccerStarz, but didn't have the new releases, and neither did any of the toy shops.

So, at Cathy’s suggestion I resorted to Amazon. It was a few pence more expensive online, but there was no postage to pay, and it arrived today


(I know people bemoan the desperate state of retail at the moment, but is it too much to ask that shops stock the latest things as they come out? That’s the trade off. I resent not being able to buy things simply because shops make the decision not to stock them, or are too disorganised to get them in. As customers we are made to feel to blame for the decline of real-world shopping, but this is a two-way street (no pun intended). I went shopping but couldn't find the things I wanted. Who is at fault here?)

Anyway, SoccerStarz Joe has arrived and fits in neatly with the two Topps figures I've blogged about before, although new Joe looks less stern than his colleagues. 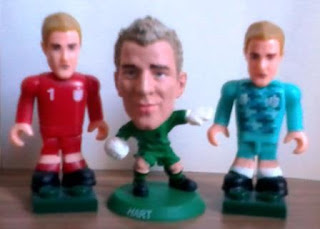 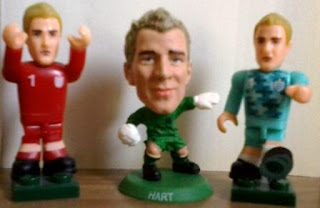 (Sorry for the slightly fuzzy photos. My phone camera isn't great.)
Posted by Jongudmund at 22:44