Recently I've started telling people that my day job is - at its most fundamental level - finding out new things that could kill me with little or no warning. Not good for a mild hypochondriac.

The past six weeks or so I've been learning too much about a particular silent assassin that could bump me off called sepsis. This is because we're building up to World Sepsis Day and I've been involved in producing the comms for it. 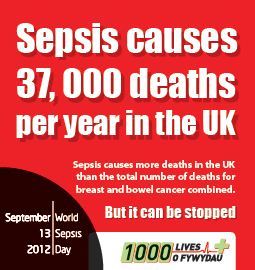 That's included this leaflet, which I'm particularly pleased with. I don't brag on what I do much on this blog, but this ended up being a nice, concise piece of print with a clear message. It took some work to get it there - it's a long way from my original idea of a postcard. But the collaborative effort has paid off. It's going to be given out in almost every hospital in Wales on World Sepsis Day (Thursday). You can read the full leaflet here.

I also had round trips to Llanelli and to the North Wales coast as part of producing the promo video for World Sepsis Day. This one was unusual as I am firmly behind the camera in the videos I've produced previously. However, this time round we needed a narrator. I'm not overly impressed with the sound of my voice introducing it, but this is the video, if you're interested.

(The trips round Wales were more bearable because I was travelling with this camera-toting freelance video professional. Thoroughly recommended.)
Posted by Jongudmund at 22:50