Here's a photo of the three 'home locos' of the SCRHC - Lacey (AKA the Big Dog), Pitbull and Snoopy

To their ranks has been added an unexpected 4th small loco - Coyote.

He's a Canadian Pacific Plymouth shunter - in a slightly different scale (HO, don't you know), and yes, he's North American. This will no doubt anger the railway purists, but I have my reasons. Firstly, he was incredibly cheap - only £14.99 brand new. Secondly, you do see foreign locos on preserved railways over here - I remember being on a narrow guage railway somewhere in North Wales that was hauled by Romanian locos. Thirdly, one day I might build a North American railroad and it would have to be West Coast! 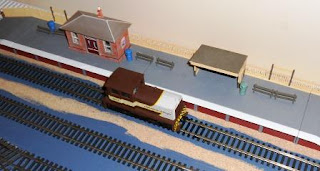 Behind Coyote you can see the new Skaledale waiting room and the important additions of platform bins. These were Christmas presents from Matt - thanks Matt! - and I think they look great. The waiting room matches the other brick buildings I've been constructing, even though it's resin, not card.

Coyote also has the distinction of being the first engine I have 'modded'. Being HO and American it had different couplings, so I bought some UK-style replacements and fitted them. I forgot to take a 'before' shot, so you'll just have to make do with the 'after' shot, which is probably the least exciting model railway related photo I've posted on here. 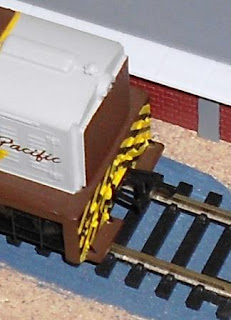