And actually my wagons do roll because my layout is a little bit lopsided. 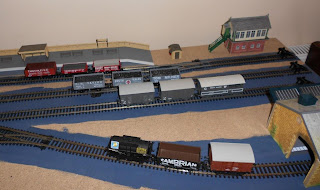 I have 11 wagons and a brake van currently, but some of them belong to my Dad I think, so I'll introduce them here, but I don't know whether they are all part of the SCRHC manifest.

Two of these three are definitely mine. The tanker I bought off eBay recently. Both it and the Cambrian open wagon are 1980s vintage Mainline wagons. I bought the ventilated van second-hand for a few quid. It has opening doors, which is quite cool. It doesn't seem to have a make on it, but I think it's by Trix.

These three private owner wagons are by Dapol. They all have coal loads in them. Two of them are local to SCHRC, but the Tom Milner one is from Oswestry, so I think that belongs to my Dad as he collects wagons local to him. (All three might be Dad's.)

This 'rake' of Great Western Railway wagons and brake van are all by Bachmann. Personally I think Bachmann produce some of the nicest and highest quality wagons on the market, although these are a bit dull and grey. I know my Dad bought these, but I think they were a gift. I'm going to try and keep hold of the brake van at least as it is printed up from Dowlais. One of the ventilated vans has 'Fruit' written on the side, which you can just about make out (click on the photo to make it larger).

And finally a splash of colour - these private owner wagons are made by different manufacturers. The Thrutchley one is Dapol and has Cardiff along with Liverpool and Manchester printed on the side. The Trimsaran one is made by Hornby (this one is definitely mine). The Harry Whitehouse one, with the white wheels, is by Bachmann. It doesn't really fit as it's based in Stourport, which is a bit out of the area. But it's a nice wagon.

As an added bonus, here's a collection of lineside huts I've built and painted in the last few weeks. They're small, but add some fun to the lay-out. I even painted the oil drums outside the lamp hut.