I feel 2011 has been a quiet year for me in terms of film-viewing, but that has changed this month with four trips to the cinema.


Three of the four films I’ve seen on the big screen have been sequels. I’m not sure what that really says about the risk-averse culture in Hollywood at the moment, but it’s been interesting to see how differently they’ve approached things. [Warning - contains information some people may regard as spoilers] 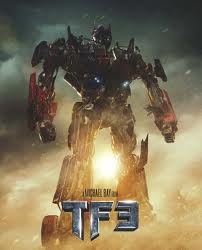 Transformers 3: Dark of the Moon takes some of the main characters from the first two films and runs with a continuing story. Of course, the most interesting story about the movie was the public spat between female star of the first two movies, Megan Fox, and the director Michael Bay. Fox got dropped from the third movie, although it’s not clear who was exactly the winner there.
So what can be said about Transformers 3? Not much. It’s better than Transformers 2, but so is just about any other movie ever made about anything. The ‘plot’ is fairly formulaic. I’d issue a spoiler alert here, but the story is so obvious that when you watch it, if you can’t spot what’s going to happen then you really shouldn’t be going to movies. You know that Optimus Prime is going to be double-crossed. You know the Autobots aren’t all dead. You know that Patrick Dempsey will turn out to be a baddy.
Still it’s vaguely entertaining. I went with the lowest of low expectations and as a result found it quite enjoyable. 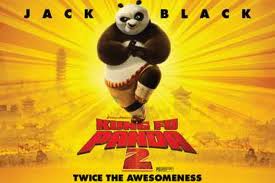 Kung Fu Panda 2, meanwhile, is a top-notch sequel. Moving on from the original movie in a quite unexpected way, we learn about Po, the Dragon Warrior’s origins and why his father is a goose not a panda. Cue an incredibly moving scene at the end of the film about discovering who you really are and who your real family is. I had a moist eye moment and had to manfully struggle to keep it together.
There are one or two clunky moments, but generally this film gets it right from the very first visual in the Dreamworks logo that features the wise old turtle Ugway fishing from the moon. It also has possibly the funniest final showdown shouting match between Po and the psychopathic bad guy Shen (superbly voiced by Gary Oldman), who can’t hear what Po is saying and so misses the bold statements about the justice that Po plans to mete out on him. 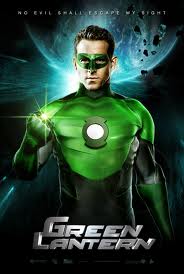 So to the only original movie in the quartet: Green Lantern. I quite liked this, although it was a bit slow. It felt a bit like a feature-length pilot for a TV series, especially as there was a lot of narration. The sfx varied in quality, and the acting was generally okay, but there wasn’t much to set this apart from any other about-average superhero flick.
There was some humour – when Hal Jordan, the Green Lantern, tries to woo his lady friend as his alter ego she recognises him and asks whether he thought she wouldn’t know it was him just because she can’t see his cheekbones. Also, it seems you can’t make a movie these days without anticipating the sequel – a micro-scene at the end seems to set up the next chapter in the story. 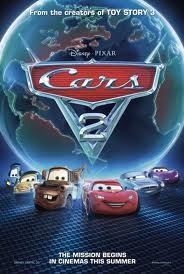 Finally, we went on the opening night to see Cars 2. This has been aggressively promoted just about everywhere, from TV spots through to a new Lego range. Unfortunately, the calibre of the film didn’t warrant such attention.
Strangely, considering this was an animated film, my main criticism is that it felt too much like a cartoon. Lightning McQueen and Mater bopping wheels together in a gangsta-style best friends’ handshake near the start of the film set the tone for the rest of the movie. Cars don’t do that. The cars in Cars didn’t do that. But the cars in Cars 2 do. It was annoying.
The other defects in this film included poor characterisation, an obvious villain ‘hidden in plain sight’, and an unnecessarily convoluted, unconvincing plotline surrounding ‘lemon’ cars with a grudge against society discrediting alternative fuels. Oh yeah and racial stereotypes aplenty.

There was a great short film starring the Toy Story characters in front of the main feature, which genuinely made me laugh, so the studio hasn’t lost its touch, but you can almost see the Disneyfication of Pixar happening in real-time as its imagination is commoditized into product inventory. Pixar generally have set the bar so high for themselves they were bound to fail at some point. Even so, I was surprised that Cars 2 was so mediocre and unimaginative.
Posted by Jongudmund at 17:02