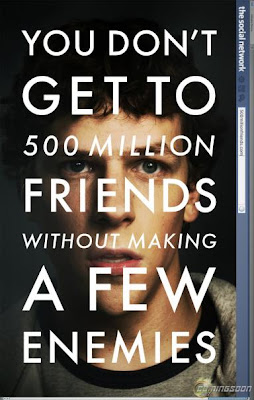 I saw this film a couple of weeks ago and really liked it. Script-wise, shot-wise and acting-wise it is pretty much perfect.

But it is also a fictionalised account of a story that plays a little bit too emotively with the truth.

So, is it a good film? Can a film be technically perfect, while misrepresenting true events?

That in itself is an interesting question. Can myth replace, and somehow convey, truth? (Well, we all read our Bibles, don't we?)

The real truth of everything that happened in the formative years of Facebook is known only to the participants, and even then we have to account for subjective bias.

But this movie works because it rings true. For one thing, none of the characters are particularly likeable. They are all flawed in one way or another. They take each other for granted. They act in their own interests. So far, so true to life.

Criticism has been levelled at the film for being misogynistic. I'd say that's misguided. Yes it shows young men taking advantage of young women and treating them disrespectfully, and it doesn't outright condemn that. But speaking as a man, this is how many men act. Portraying it isn't misogynistic. It's embarrassing to think such chauvinism is perpetuated, but not portraying it would be dishonest.

In another way it rings false. Mark Zuckerberg has said that in reality Facebook was a lot of hard mundane graft, not partying with co-eds. Experience seems to support Zuckerberg. The geeks I know don't party hard while coding.

The end verdict is that it's a believable version of events and really that's what counts. I loved the way the story was told, and am smart enough not to believe that it's true. That's kind of how I react to films, especially ones 'based on' a true story.

And there was one stand out piece of dialogue. Zuckerberg is asked whether The Facebook is finished and says it will never be finished. "It's like fashion. It will never finish." I loved that line. There are so many things in life that will continue on. Facebook is probably one of them. The general trend towards technology is another.

Some people have described The Social Network as the movie about Facebook for people who hate Facebook. But, if so, this is a sinister message for them, because the central premise of the story is that there is no stopping point.

And that's food for thought for all of us.