I went with Matt (and Matt's kids) to see my fourth Ice Hockey match of the season last night. Weirdly that means I've seen more hockey games this year than live football matches. although as Matt pointed out that's only because I live close to the hockey and not close to my football team.

Anyway, I thought I'd share a couple of pics of the Devils (in white) in the process of beating title pretenders the Panthers (in red/black) 3-0 on the night. The third goal was hilarious, as the Panthers had taken their netminder off in the final minute to gain an attacking advantage with an extra forward player. The puck broke to one of the Devils guys who pinged it the length of the rink, scoring the strangest goal I've yet seen in hockey. 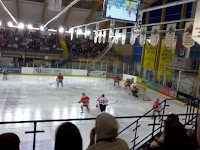 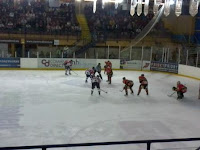 I was thinking of titling this post 'At the lonely end of the rink' as homage to the Tragically Hip, who are probably the only band to consistently reference Ice Hockey in their songs. But then I figured no one would get the reference, so didn't bother.
FTR: This season I've seen a pre-season warm-up game against Coventry which ended in a draw, two games against Belfast Giants, and this comprehensive victory.
Posted by Jongudmund at 08:18