I've recently been buying Padres baseball cards on eBay and the other day I bought this Fleer 'Bat's Incredible' card featuring a piece of genuine game-used bat, as swung by Phil Nevin, onetime third baseman for the Padres. 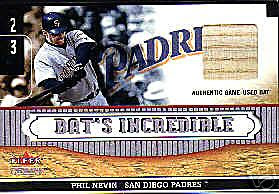 The card is in A1 condition, but it's weird to think they bought a bat and cut it up to put slivers of wood into a trading card. It's 'authentic game-used memorabilia' but it's nowhere near the same as having a jersey you could wear, or your own bat you could play with.

I was quite impressed with one of the competitions at the ice hockey the other night where you could literally "Win the shirt off their back" - the winner could ask for his favourite player's game worn jersey and it was presented to him/her out on the ice at the end of the match. Now that's memorabilia.

Anyway, I'm quite pleased with the card, especially as Phil Nevin was actually playing for the Padres when we saw them take on the Giants in 2005. That makes the whole 'collectible for collectability's sake' thing a little more personal to me.
Posted by Jongudmund at 14:22